This website contains information for a broad scientific audience and may include information on products or indications that are not licensed, approved, or accessible in your country or region. Prescribing information or other medical information for products may also differ between countries or regions. Please visit beigene.com for more information.
OR
Login with DocCheck

I am not a Healthcare Professional

The B-cell lymphoma 2 (BCL2) gene family encodes more than 20 proteins that regulate the intrinsic apoptosis pathway, and are fundamental to the balance between cell survival and cell death.V

Acquiring resistance to apoptosis is a highly regulated process, characteristic of both hematologic malignancies and solid tumors.6Dp Anti-apoptotic BCL2 has been shown to promote malignant cell survival by attenuating apoptosis. The dysregulation of 6T$R results in overexpression of the anti-apoptotic protein BCL2 which alters the balance of pro-apoptotic members of the BCL2 family. In normal cells, cell death signals trigger BID and BIM to activate BAX and BAK. Oligomerization of the pro-apoptotic proteins BAX and BAK, results in mitochondrial outer membrane permeabilization (MOMP), the release of cytochrome ^ and second mitochondria-derived activator of caspase (SMAC) from the mitochondria and the subsequent activation of caspases resulting in cell death.V

Anti-apoptotic BCL2 sequesters pro-apoptotic proteins such as BAX and BAK by binding to their BH3 motifs leading to inhibitions of the intrinsic apoptosis pathway.V

BGB-11417 acts as a BH3 mimetic. By binding to BCL2, it induces BAX-BAK-dependent apoptosis. BCL2 is a well-validated target for B-cell malignancies. With long term treatment, recurrent mutation of G10V in BCL2 has been reported to mediate resistance to BCL2 inhibitors. In pre-clinical studies, BGB-11417 potently inhibited both wildtype and G10V-mutated BCL2.N 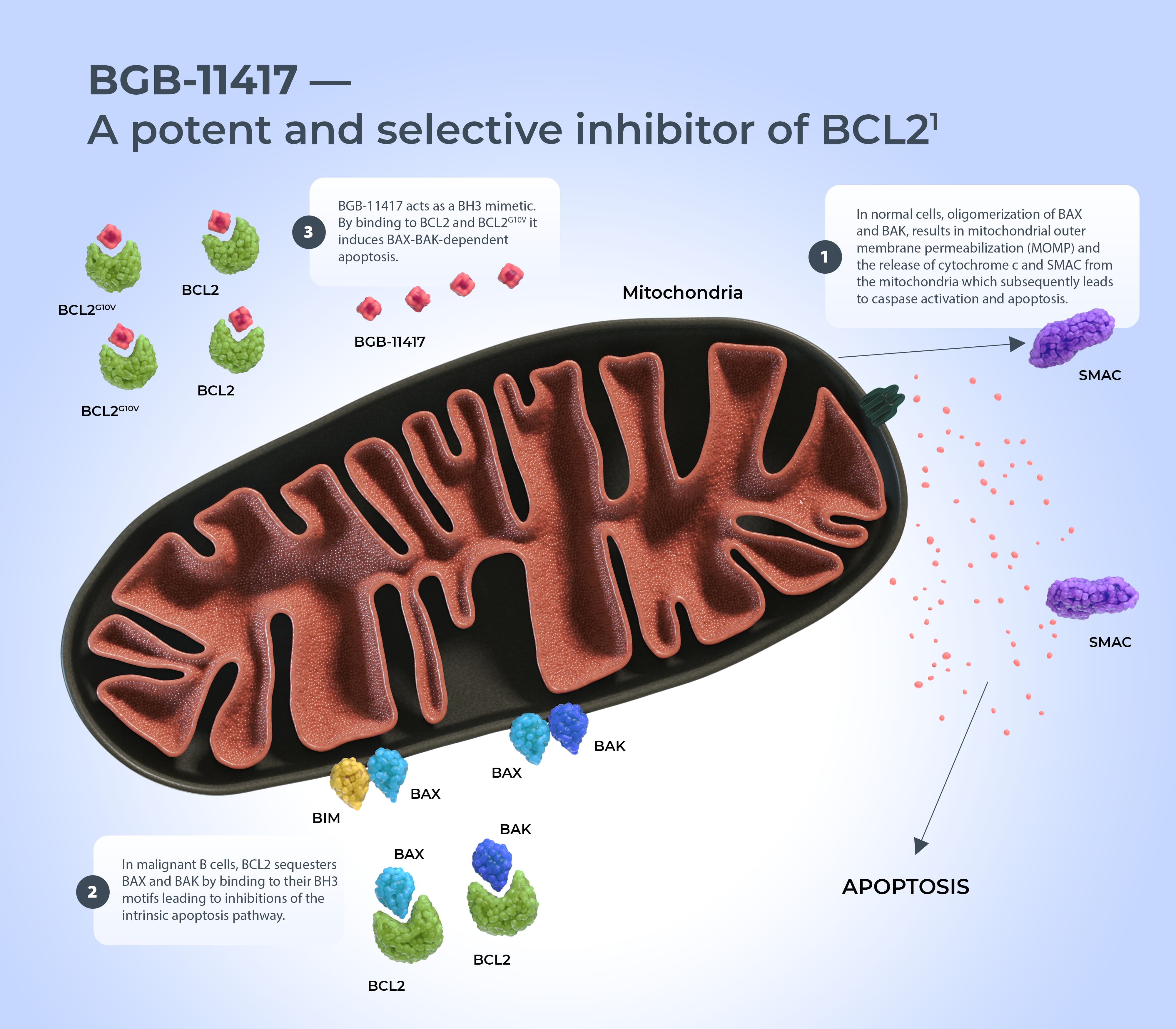 For an exhaustive list of BGB-11417 monotherapy and combination clinical trials, view the jx/xLA#6x!J o*7/*s@. 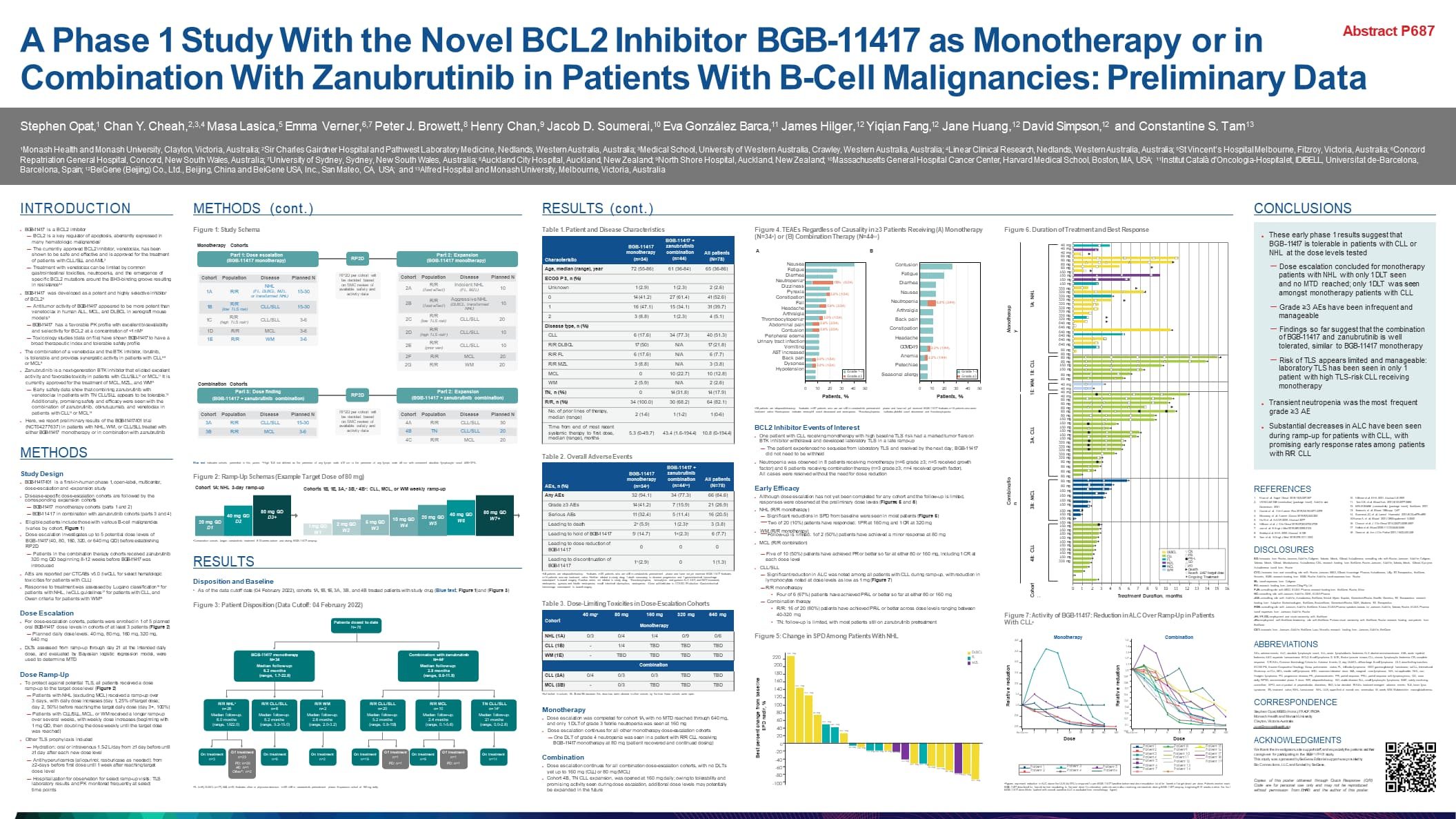 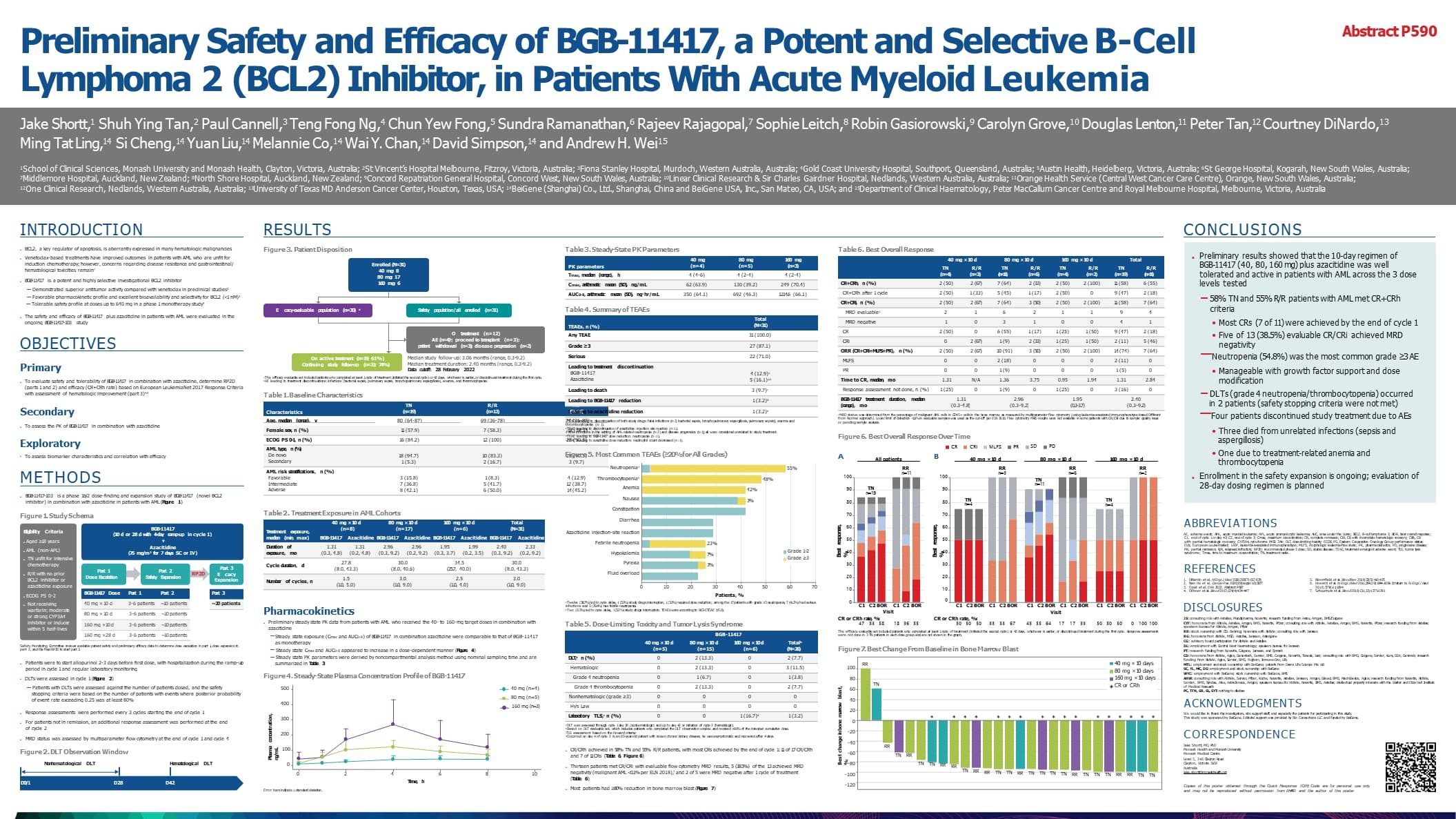 This link is provided for information purposes only. Please be aware that, if you click on it, you will leave beigenemedical.info website. The link will take you to another BeiGene website, the content of which is subject to the locally applicable laws and regulations.

BeGene Switzerland GmbH makes no representation that the information provided on the website is suitable or available for use or access in locations outside the country for which the website is intended.

Please ensure that you belong to the target group of the content provided on the linked website and that your access to it complies with the applicable laws and regulations.

No, I want to go back Yes, I would like to continue

This link is provided for information purposes only. Please be aware that, if you click on it, you will leave beigenemedical.info website. The link will take you to a website owned and operated by an independent party over which BeiGene Switzerland GmbH has no control or influence (“third-party website”).​

Do you really want to leave the beigenemedical.info website?

No, I want to go back Yes, I would like to continue